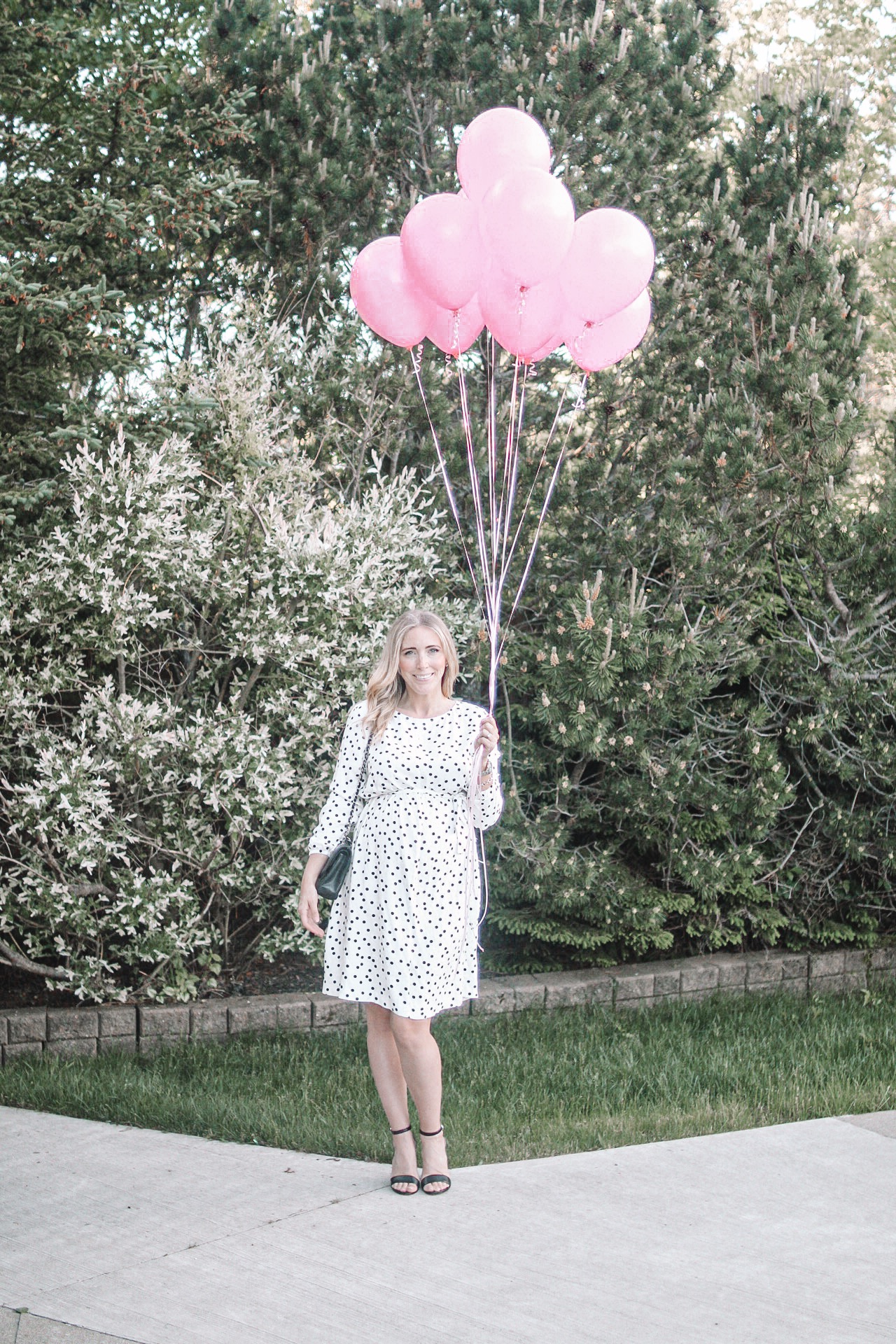 My Dress: Isabella Oliver (on sale!) | My Shoes: Steve Madden | Elle’s Dress: Not available in denim, but this is same in different colour | Andrew’s Shirt: Eton | Andrew’s Shoes: Ted Baker

It has been such a busy and EXCITING week. We are visiting my family in my beautiful hometown, Sydney, Nova Scotia. We came for my niece Ireland’s graduation (the tilted photographer responsible for most of my photos) and a friend’s wedding. We also came with exciting news, we found out the gender of our baby and decided to do the gender reveal while we were here, so we could include some of my closest friends and family, plus we couldn’t keep it secret much longer!

As you can tell, we are having another little girl. We couldn’t be more thrilled. We really would have been estactic either way, as we just feel so blessed to be able to have another child. But, I must admit, it will be SO nice for Elle to have a little sister. I am blessed to have both a brother and two sisters and I love them all – they are literally my best friends. I just know Elle and her little sister will be so close. Elle is so nurturing and sweet – she will be such an amazing big sister and role model for our next little baby.

We wanted to keep it fun and laid back, so we only invited a few of our close friends and family that live near by. We then set up a FACEBOOK group and invited our close friends and family from away to join in as we revealed the gender live. We did this with Elle’s gender reveal as well. SO even though many couldn’t be there in person, it was like they were. Everyone was giving their guesses – it was a lot of fun. Technology can be so great that way!

Anyone that knows me, knows I love a beautiful cake for celebrations. We were concerned that landing in Sydney on Saturday evening and doing the reveal on Monday would pose a problem, so we had our cake made at a local bakery in Fredericton, called Chess Piece. They did Elle’s gender reveal cake too. They do a great job, especially for short notice. Trying to get it home was a bit of a mission. Between all our luggage, baby gear and of course, us (Sadie, Andrew, Elle and I), we didn’t have much room for a cooler (which was advised to keep the cake cool). So we cranked the air conditioning and froze to death the entire 6 hour drive – haha (don’t worry, Elle was cozy in her blanket!).

The cake had the colour of the gender, but the way we delivered the surprise to everyone was with balloons. This was super simple, thanks to my niece Anna, whom took the time to create it for us! She taped two large boxes together and covered them in brown paper. She then put some polka dots on as a design and created heart, that said, “it’s a…” We then took the box to the party shop and they put a bouquet of (pink) balloons. They said it’s best to do this as close to the reveal as possible so they pop out nicely! So upon opening the box, out popped the pink balloons! 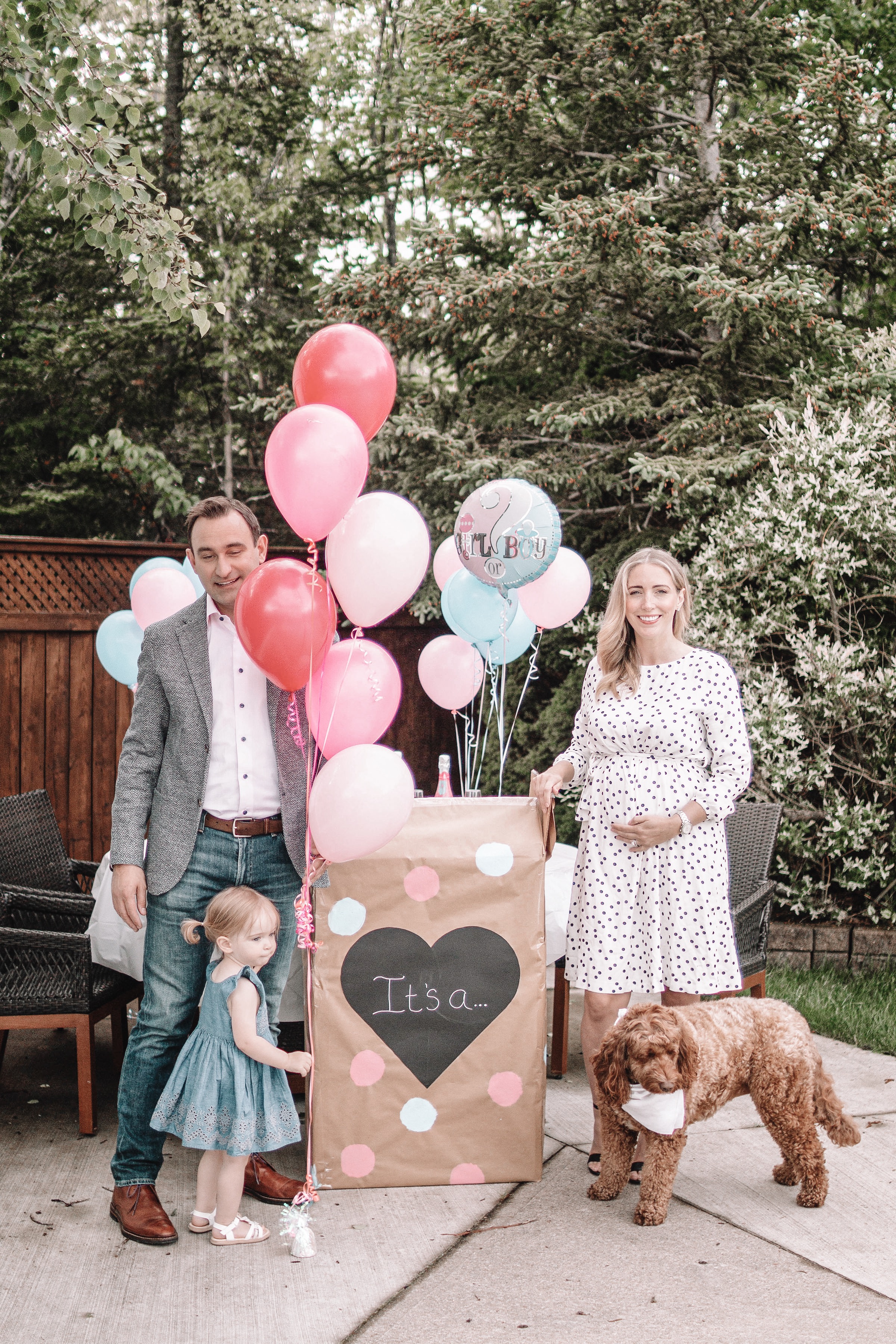 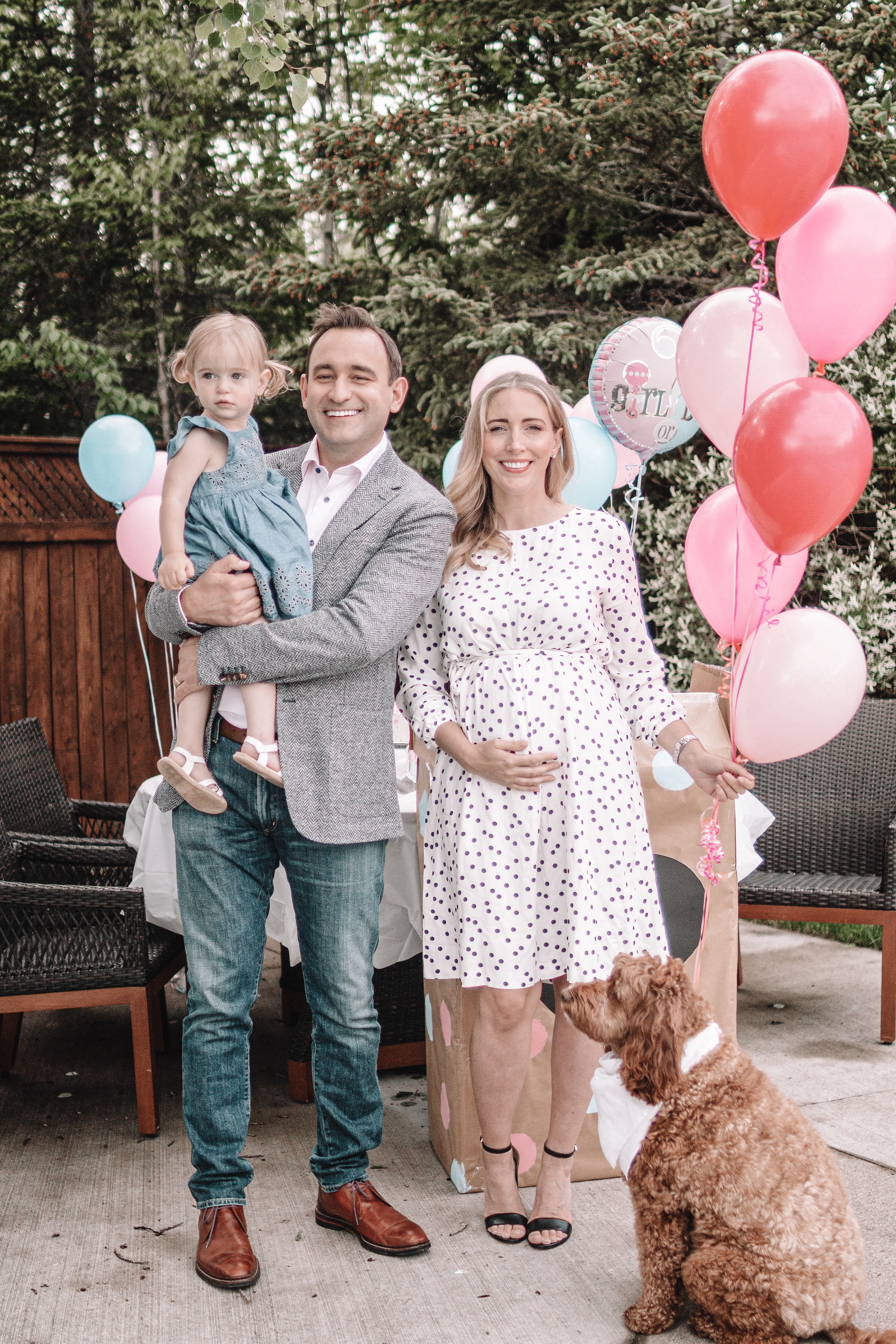 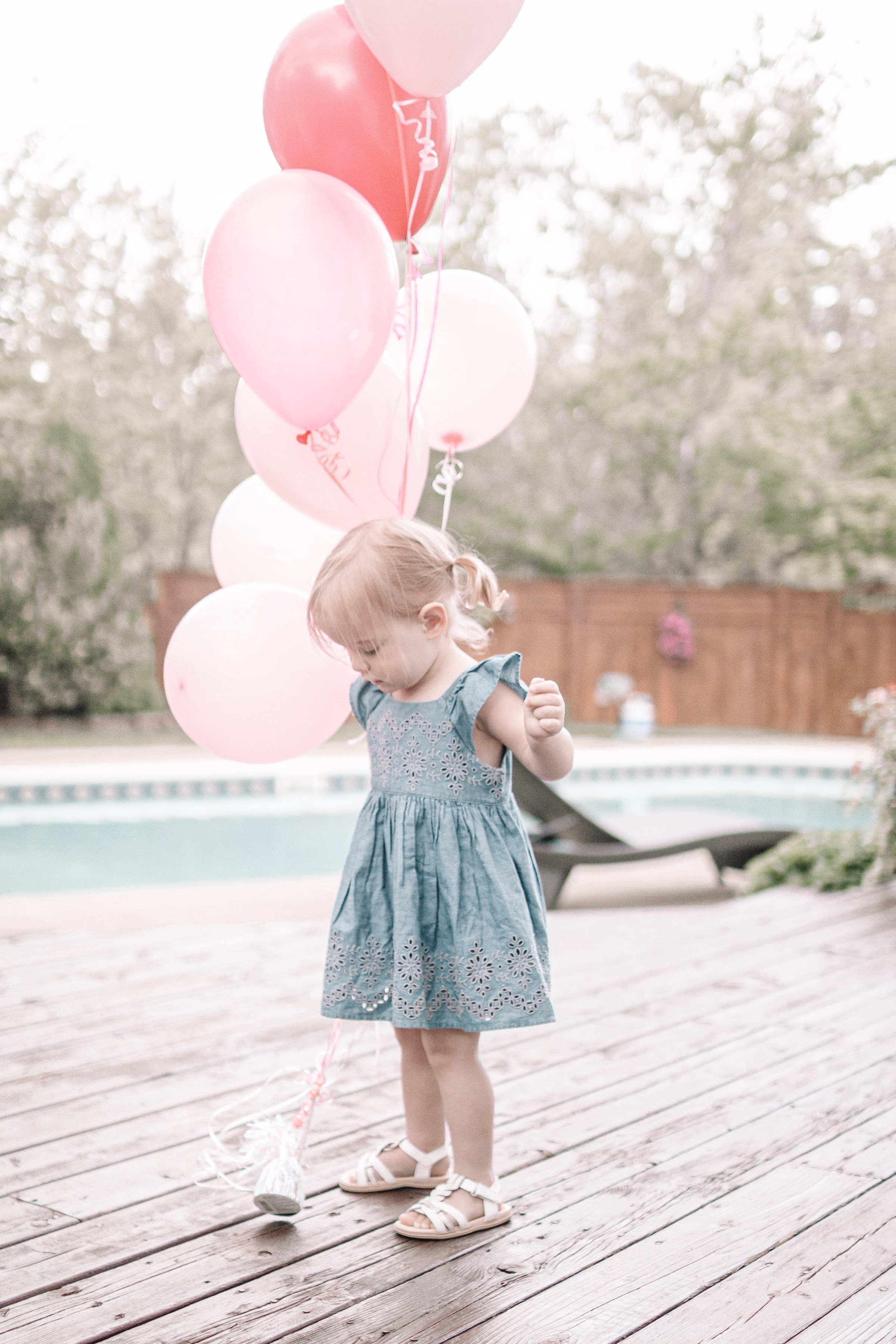 I know a lot of you guessed boy! I have to admit, I knew from the start it was a little girl. I guess you can call it mother’s intuition. I am so excited to start preparing for our next daughter’s entry into the world. So much to do, with renos to our house, to creat another nursery. I am mostly excited to choose a name. I have one from Elle’s list that I loved, but I will be keeping it hush this time, as someone actually used one of our first and middle names (entirely) that we had on our list and had hoped to save for next baby. Now I understand why people keep their names secret! 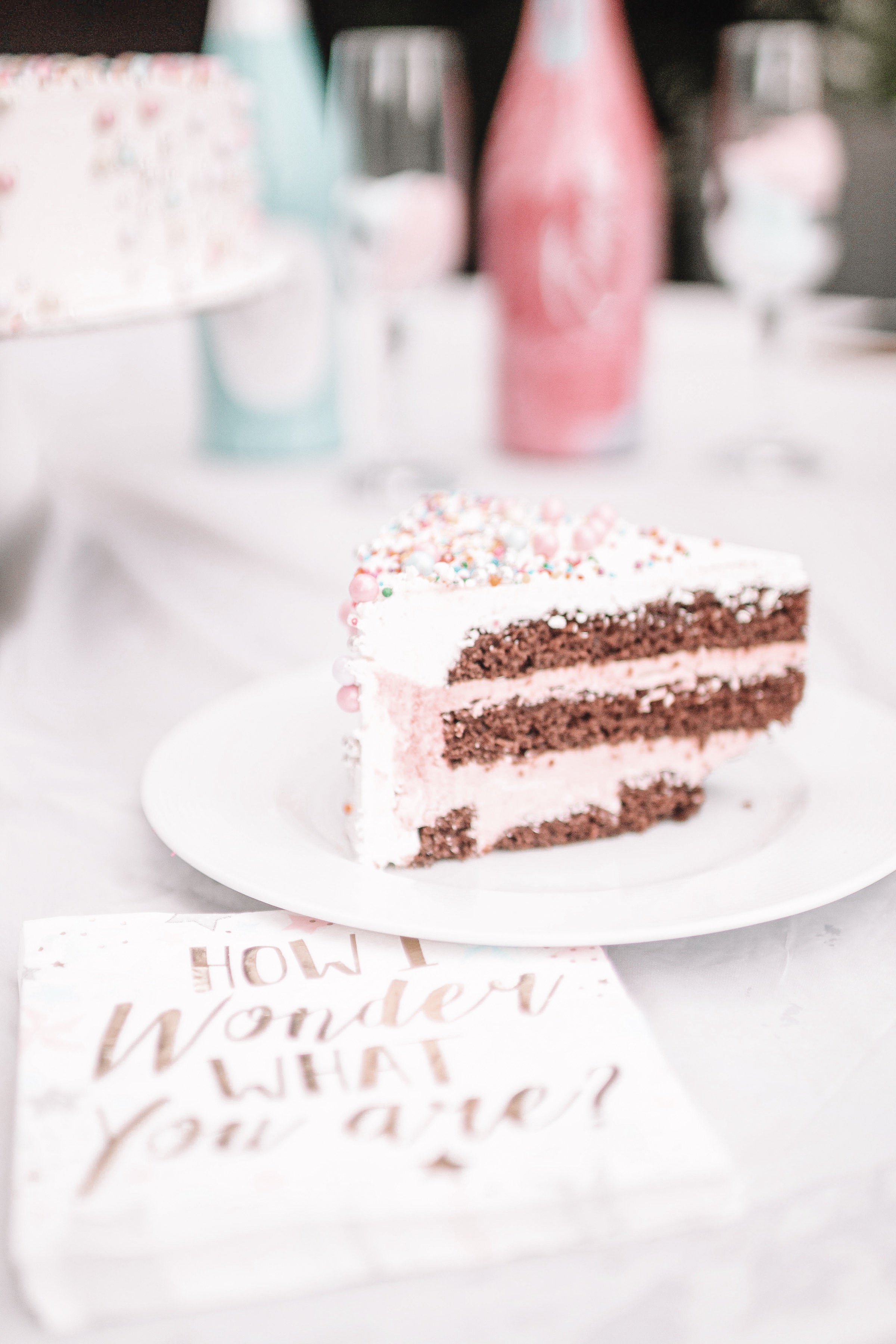 I still love hearing name suggestions tho! Maybe you have one you want to share that isn’t on our list! If so, send them along. Until next time, keep enjoying your beautiful life!

2 thoughts on “We’re Having Another Baby Girl!”